I simply can’t handle living in Korea any more when it comes to adorable make-up and skincare ranges. First I had Line Friends and Kakao friends to choose from, Doraemon and Shin Chan products, and not long ago, Holika Holika released their Gudetama range. Being one of my favourite characters, it was hard to resist the urge to BUY EVERYTHING AND BUY IT NOW. So I didn’t bother and bought it all, right then. I told myself that was the end, though. At least, the end for the foreseeable future. Then A’PIEU went and ruined it all. Last week, they announced that they were to release a new Rilakkuma range in their shops. This Sanrio character has been another favourite of mine for years, so there was no holding out. I simply had to buy the products. After all, who knows how long they’re going to be on sale for?

So, on June 8th, the collection was launched. A’PIEU are phasing their releases of the products – more are due to be released later. At the time of writing (early June), the collection only had three items:

These products already existed at A’PIEU, so essentially this is just a cutely-packaged version of some of their successful products. The BB cushion is the same as the Air Fit cushion, as is the blush. The BB cushion comes in two shades, and the cushion blush comes in five. Eyeshadow palettes and lip tints are due to be released at a later date.

UPDATE: If you’re looking for the latest (July) update of the collection, I’ve got you covered here.

The products are relatively inexpensive, so I didn’t feel too guilty for indulging in the adorable. I decided to buy a cleansing foam (Jelly Brightening Cleansing Foam), and a cushion blush in shade VL01, the pinkest looking shade.

I’m not going to get too in-depth here, rather just give you some pictures of the collection and my initial reaction to the products. Let’s start with the cleanser. I bought the cutest looking one (to me, anyway), which was covered in little ducks. It’s the Jelly Brightening Cleansing Foam, and once I have translated the ingredients, I will do a more thorough review of it. Let’s look at how it performs.

I still had a little blusher on my head from swatching earlier in the store, so I tested out the foam on my hand before going in for the face plunge. The texture is like a thick gel, slightly runnier than some of my other cleansers, and if you’ve used oil-to-foam cleansers before, this reminds me of that texture. There is no smell, and it feels light on my skin. As you rub in the gel, it starts to foam up. Add water, and it gets really bubbly. I use Nature Republic’s charcoal sponge – it frothed up a treat and I only needed to use minimal amounts of the product.

Full make-up face to nothing. This took about 2 minutes as I was taking pictures, but it didn’t take long at all to remove my make-up. The only part which was difficult was, as usual, my stubborn waterproof eyeliner. It came off, but most likely thanks to the sponge’s slightly rough texture.

The next product I treated myself to was the Air Fit Rilakkuma cushion in v101.

I like my cheeks to be a rosy, pink colour (I’m a true English rose, what can I say?), so opted for the pinkest shade. Below are the shades that the cushion comes in. 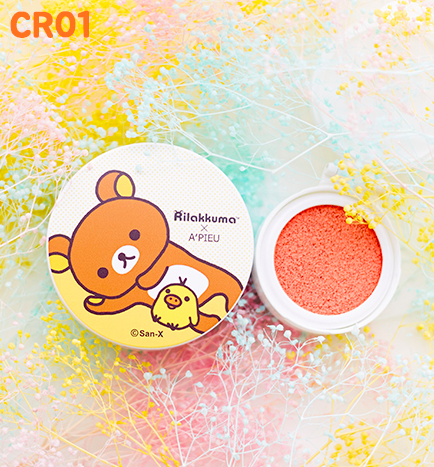 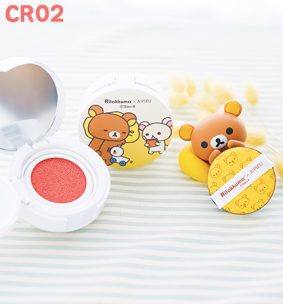 The V101 is closed in the official photograph, but next to it I’ve included what the product is supposed to look like applied on the skin. The colours are not as strong as they appear, and in order to look like the picture, I’d say you’d have to apply a fair amount and have much clearer, smoother skin than the average Jane!

There is also a cushion which looks much darker than the others, and I was a bit confused about it in the shop, as it is pretty much brown.

This cushion seems to be for contouring, and rather than being a blusher, you are supposed to apply it to the jaw line in order to create shadow and highlight areas on the face. It might be something I’m interested in testing at a later date.

However, I plumped for the v101 cushion, and here are my first impressions: 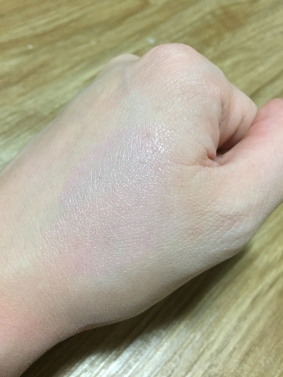 The packaging is very cute, and I love the little cushion puff. Dabbing the puff into the sponge, the liquid appears very light, and you do have to apply several times before it makes a big difference. I did some swatching in the shop and the colour was definitely not very pronounced. It did last a fair while on my hand, though. The cushion puff feels soft on my skin, and doesn’t absorb too much liquid – but as the colours are so light, you have to apply several times. I imagine this means your puff ends up rather saturated after a while.

Some before and after shots. As you can see, there isn’t a huge amount of difference in my opinion. I think the colour is more obvious in real life – the camera doesn’t do it much justice – but it still could be much stronger, and this is one of the brightest of the bunch. It lasts quite a while on the skin, and is easy to touch up throughout the day. I have redness in my cheeks anyway, so sometimes it’s hard to tell what’s redness and what’s blusher, but I know this didn’t last as long as my usual powder blushes. I normally use Erborian’s Pink Perfect Blush, which I apply twice a day, and lasts me a long time (and it never runs out, I swear it still has the same amount it did when I bought it). If you’re not averse to touching up, this could be a nice product for the price tag. It’s priced at 5,800W, which is $5/3.46GBP/€4.42. It’s not at all a bad price for what you’re getting.

I’m not going to rate the products thoroughly as I haven’t used them for nearly long enough yet. I will say that they seem decent enough and I’m pleased with the cleanser – much more so than I imagined I would be. The blush I’m not so sure about yet, but as they’re so cheap, I might try another shade and see how I get along with that. After some further use, I’ll make a final decision on it.

For now though, let me just leave you with some pictures I took in the store, which should display the full collection for you and give you a taste of what A’PIEU is like over here in South Korea! 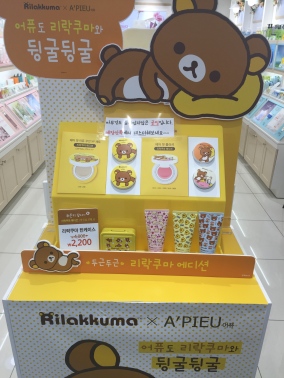 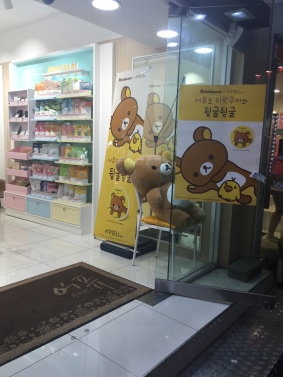 Here are some swatches I took of the BB cushions, plus some pictures of the upcoming eyeshadow palette and swatches of the lip tint, due to be released later in the month. 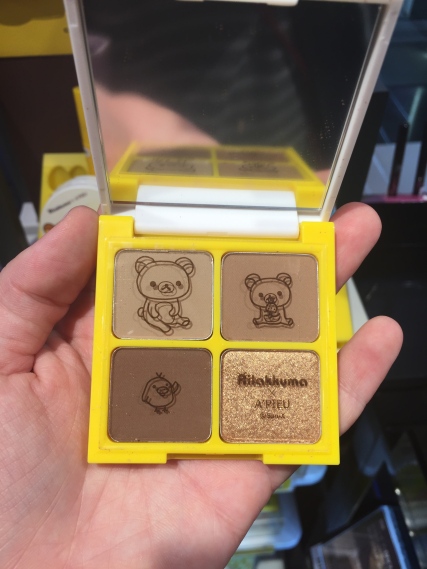 Watch this space for the next release!

A note from Nourish the Skin: