Ok, first things first. This cream probably doesn’t need a prelude of any kind. The hype that surrounds the CosRX PHA Moisture Renewal Power Cream precedes itself – CosRX barely needed to do any marketing at all, considering as soon as a new product is announced both Reddit and Instagram lose their marbles and start to PSA like there’s no tomorrow.

I, however, am not all aboard the CosRX hype train, first class. I’ve got a seat in the quiet carriage. I’m there, but I’m not exactly chomping at the bit about it. I’ve used some CosRX products, and I really like their Good Morning Low pH Cleanser, the Skin Returning A-Sol and the pimple patches (surprisingly I seem to like a lot of the acne aids, but I don’t have acne). Aside from that nothing has yet to be much but ‘meh’.

PHA is an exfoliant, and you might have heard of its crew AHAs and BHAs. PHAs are more similar to AHAs than BHAs. AHAs are exfoliants that remove the dead skin cells on the surface of the skin, therefore helping to improve skin tone, by revealing the brighter, healthier, and plumper skin that lies beneath. BHAs penetrate the oil produced by skin, and clean out the excess skin cells and debris that lie within. AHA – good for anti-aging, brightening, and improving tone. BHA – good for acne-prone skin, oily skin.

PHAs, on the other hand, are less irritating to skin, as they have a larger molecular size. This means they cannot penetrate the skin quite so deeply, and are more gentle than AHAs and BHAs. What does this mean? PHA – good for sensitive skin. Hooray!

Let’s bear in mind that my skin is mostly dry/normal, and products don’t usually break me out or give me redness, but generally I react more to my environment and have redness in the skin and irritated areas from time to time because of pollen, dirt, or even temperatures.

I was sent this cream by Jolse, who provided the product without packaging, for blind review. They wanted us to be unaffected by ingredients, so I didn’t look at them until writing this review. I also was using samples of this cream about two weeks before I started using this, so I’ve been using it for about a month now.

Nothing in this list really surprises me to be honest. I know CosRX use palm oil in their products and many people wish to avoid that, so it’s something to be aware of. Sunflower seed oil doesn’t surprise me either as it’s quite common in moisturising creams – it helps decrease water loss and improve the skin’s natural barrier. Sodium hyaluronate also helps your skin retain moisture, and niacinamide is commonly used in moisturisers for its anti-aging properties that help restore skin.

However, I want to also mention that this product contains 3% PHA. This isn’t much compared to Swanicoco’s 10% PHA product. It’s a small number, so perhaps this means the exfoliation provided is minimal – but remember, this is targeted for sensitive skin. We’re looking to be kind. 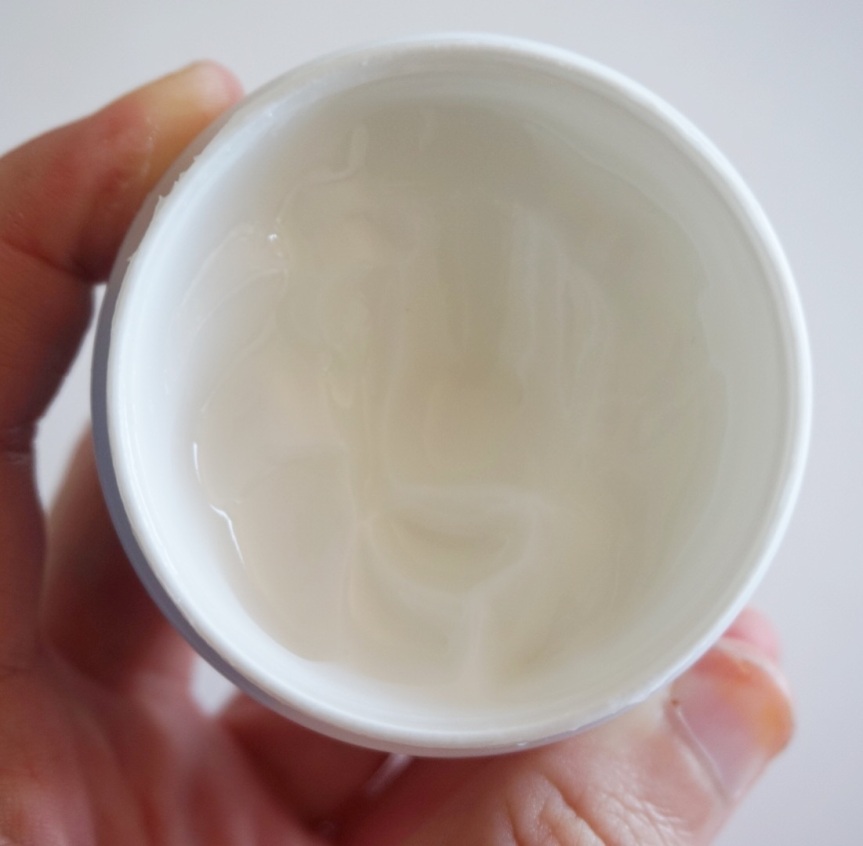 The cream looks thick, but actually when you touch it it feels less like a cream, and more in-between a cream and a gel. In my opinion, it feels slightly oily and greasy, because as my skin doesn’t get on well with oils and similar-style products, those kinds of textures are very noticeable to me. As you apply, you can feel a slight oily film being left behind. However, this is not a film that sticks around. It needs to soak into my skin for a little while, but unlike with oils, I don’t get any pilling when I apply sunscreen or other products directly after. 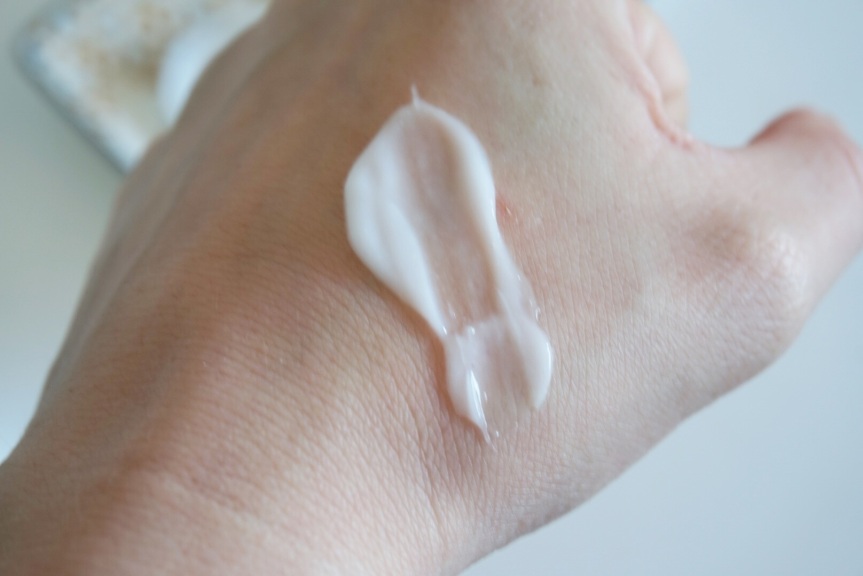 It spreads easily and absorbs fast, so despite the texture feeling a little greasy to me, I am happy with how it feels overall.

I don’t detect any particular scent. There isn’t anything added to it. If I put my nose practically in it, I suppose I can smell a general cosmetic-y smell, but nothing specific and nothing noteworthy whatsoever.

I don’t have the box, but I do have the tub. In the jar you get 50ml of product, so it’s an average-sized cream. The product is now priced at $25 (USD) at Jolse, $23.90 at Wishtrend, another Korea-based shop, and €23.41 at SkinID (a European-based store) – so they’re more or less the same after conversion. Not at all bad for the price and I can see why people like CosRX for the price points.

The tub is standard with a larger screw lid, and then a small plastic covering inside to protect the cream, when it’s brand new. The branding is the same as all CosRX – simple, with a few lines describing what the cream does, and a block of colour usually corresponding to a certain line or type of product, e.g this one is blue, as it’s moisturising. Standard packaging, nothing pretty or special, but CosRX’s branding has always been simple and functional.

Because of the oiliness I detected, at first I was worried this wouldn’t get on with my skin at all. I did need that wait time, and the feeling at first was that this cream wasn’t really doing anything for me at all. It did indeed absorb, but I didn’t notice it as being especially hydrating or adding to how my skin already felt. It’s looking pretty hydrated these days and I’m happy with it, so it was always going to be a challenge for anything to really improve. I find it hard to get excited about creams, too, as they usually don’t do much for me other than lock in moisture, or not work at all and leave my skin a greasy mess.

So testing was going fine. Nothing special, nothing that made me think I loved the product, and nothing that stood out to me. However, for a few months now I’ve had some little bumps at the side of my face, just under the surface. I believe they may be closed comedones, but I’ve never experienced them before, so it was a little odd for me. They disappeared for a while, but then came back, possibly because I was using too much product. So I cut my routine down to simple toner, serum, eye cream, sometimes an emulsion, and then this cream (especially in the morning, I prefer to use fewer products then). Really what I was doing was getting rid of a couple of the hydrating serums I use, so I could also see if this cream gave me enough hydration without clogging pores.

My bumps are gone! It was definitely beneficial to cut down on my routine, but what surprised me about my skin was how smooth it felt after I had started using this for about a week. When I wake up in the morning, my skin feels really smooth, and I notice this as I wash my face and apply my toner. There are no bumps and I’m pleased with the texture. I don’t think this cream seriously seriously exfoliates much, but it seems to work even if it is mild – it helped my texture overall for sure.

I don’t think this cream is the most hydrating I’ve used. I don’t find it locks in enough moisture and I prefer it if I use a sleeping pack at night, but sometimes I’ve been able to go without. It’s ok for hydration. Not the best, but it’ll do for my skin. For someone with very dehydrated skin, I wonder if it would be enough.

However, the thumbs up I’m going to give with this cream is the work it’s done for me texturally. The sides of my face are so soft, and my forehead is so clear (it is a place a little prone for bumps and spots, too). So I do think the exfoliation works and it would be good for those with sensitive skin. However, I do not think it would be strong enough for those who are acne-prone for it to really make a difference to spots. If you’re like me though, and you only have minor flare-ups, you could tame them by using this light PHA.

At only €23 (more or less), I would purchase this product. I don’t get too excited by creams, so I don’t like to spend a lot on them. This to me is functional and simple – just like CosRX usually are.

A note from Nourish the Skin: